False Advertising, how you can save money when buying an RV 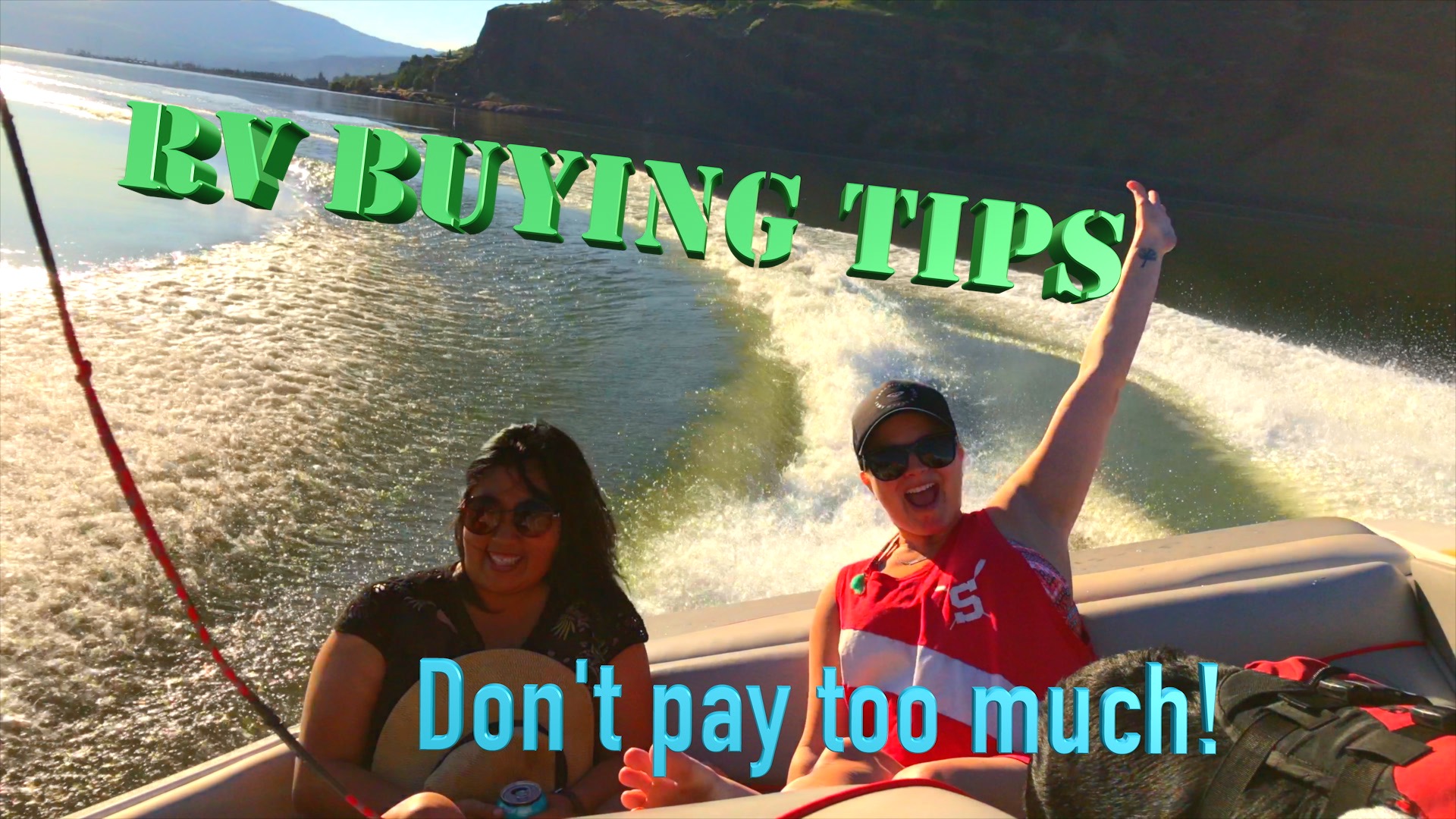 The Smoke and Mirrors of RV Buying.

We’re sharing with you a few dealership “secrets” learned from purchasing our RV. Every RV sale will likely be different, but it’s in your and your money’s best interest to know some of the tactics dealerships employ. Despite considerable homework, here are 3 things that still took us by surprise during our RV purchase. 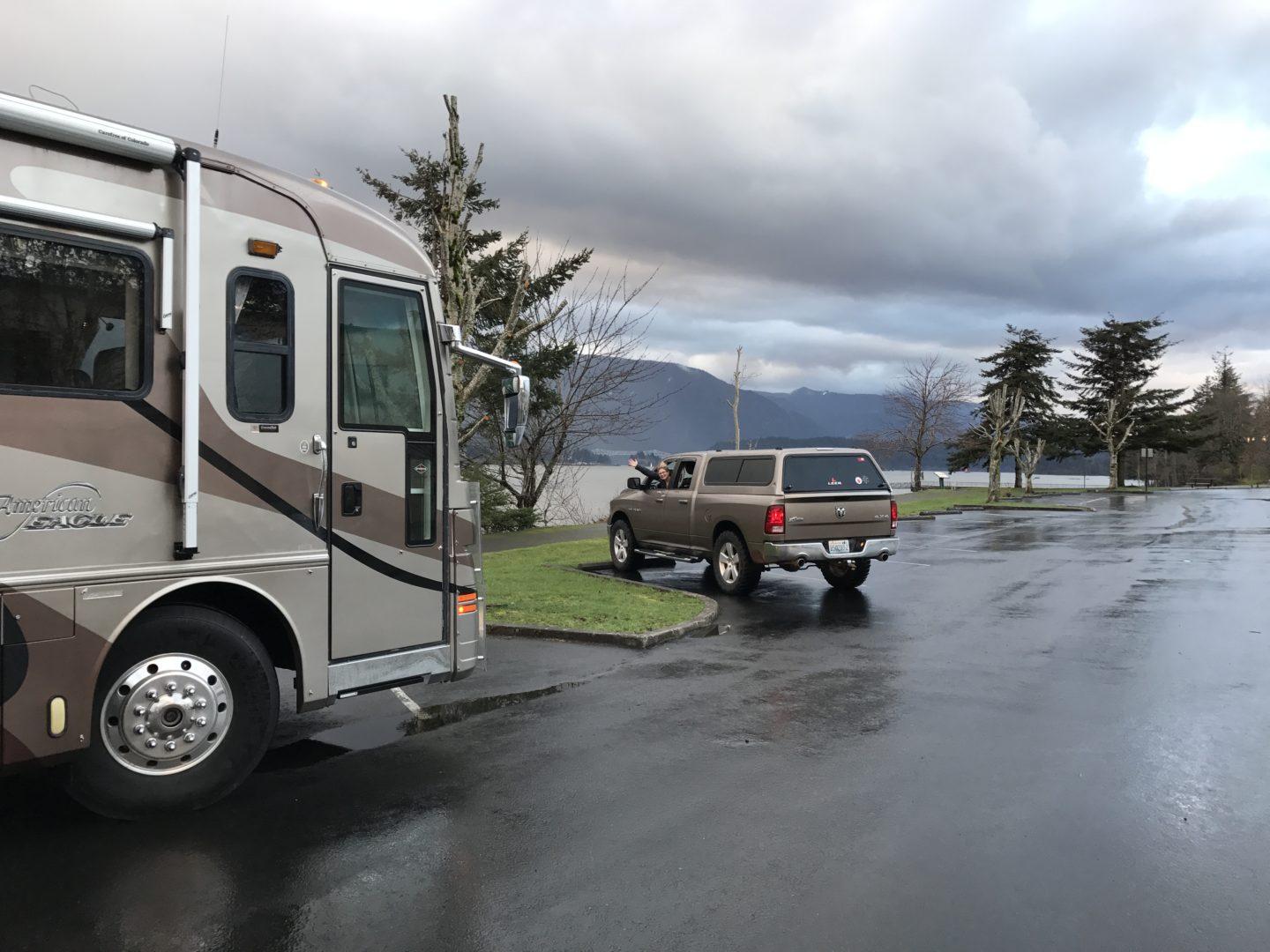 1 – Financing Fees and how they get hidden

Many of you have seen our other blogs and videos. We discussed RV Financing options (shhhh… Don’t tell Dave Ramsey) and explained why we chose USAA for our loan. We view debt like it’s a terrible 4-letter word, because it is, and we decided to go back into debt responsibly. How? We surveyed all options for an RV loan and chose one that: 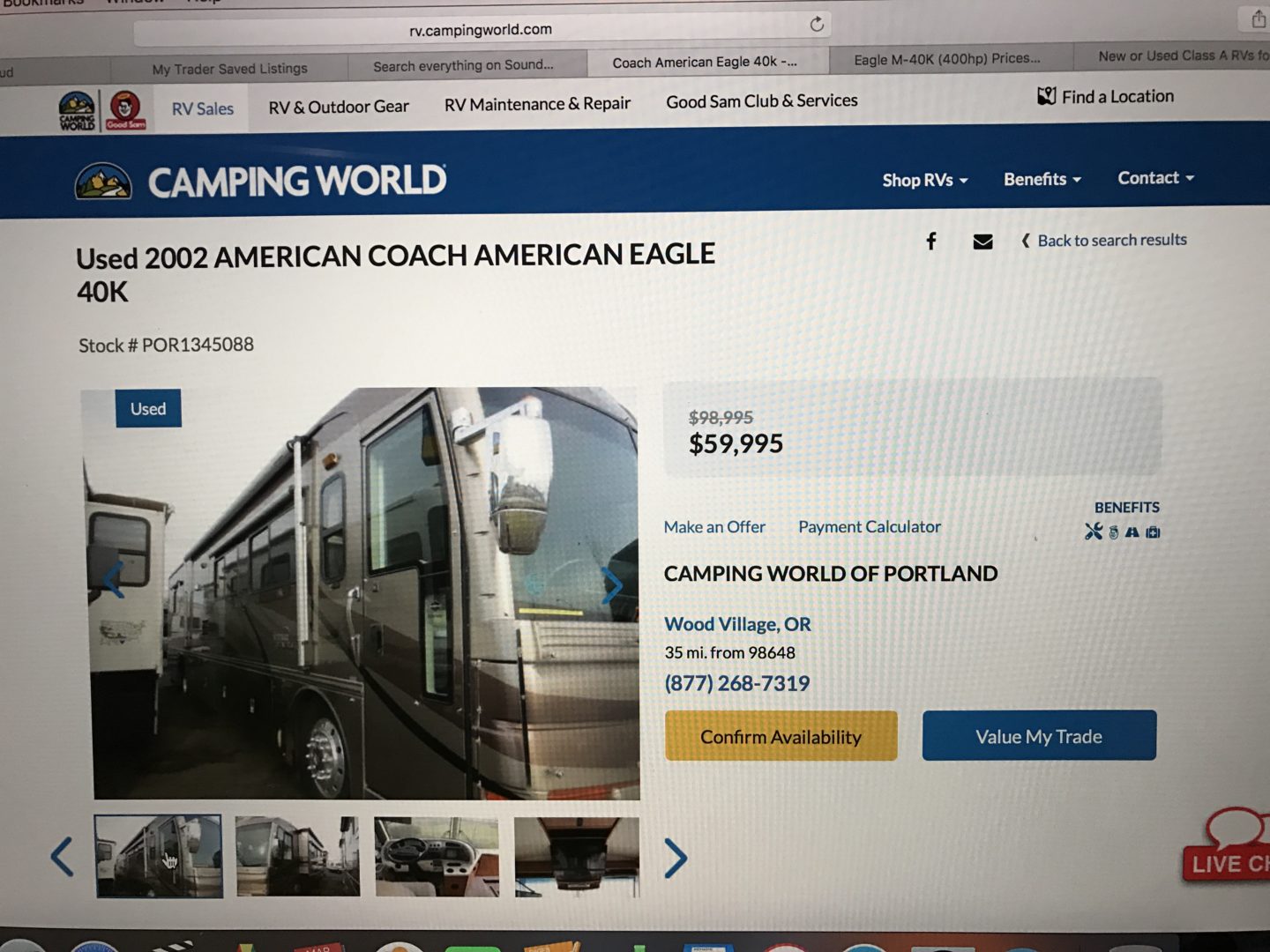 When it came time to negotiate and agree on a price, we offered $55,000. Camping World agreed to $56,000. This was incredibly undervalued in our favor BUT, they stated that if we didn’t use their preferred lender they would tack on a $1,500 fee. We held firm and said, “no, we won’t pay any extra fees.” Looking back, I’m proud to say we were real hard-asses. The RV was already underpriced (NADA value was over $70,000) but we knew it was in our interest to whittle the price down as much as they’d allow. After a few minutes our salesman came back from the shark tank and informed us they dropped the fee, agreed to our price, AND we had an accepted offer! No way! We were ecstatic.

The following week, after learning about problems found during the RV inspection (watch that video here), we found ourselves in yet another negotiation. The problems weren’t too awful, but we seized the chance to drive the price lower, again. Pay attention, here’s where the smoke and mirrors were exposed. 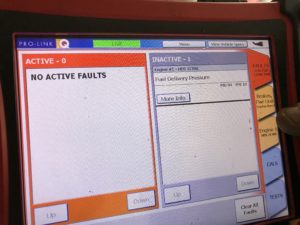 In this final negotiation, the General Manager came to directly negotiate with us. His exact words were, “How much more do I have to lose to sell you this RV?” Well… twenty grand? No we didn’t say that, but we began explaining what problems we found and that we thought a fair price was $52,000 ($4K lower than our original agreed price of $56K). The GM began reviewing the prior negotiations and stated that dropping to $52,000 from $54,500 would be too much and he could only go down to $53,000, final price.

First, hell yes $53,000 is acceptable! (We began a happy dance in our heads while maintaining poker-faces.) We graciously accepted his offer, but did you catch that slip?

We got lucky the truth slipped through the cracks during our negotiations. But, if they really would’ve waived the $1,500 fee perhaps we could have saved another $1500? During your RV purchase keep this in mind as you negotiate. The dealership’s job is to make money, your money.

If you haven’t already seen part 2 of our RV Purchase Videos, you really should watch it. In about 3 minutes we go from top of the world to beating our heads against the wall. 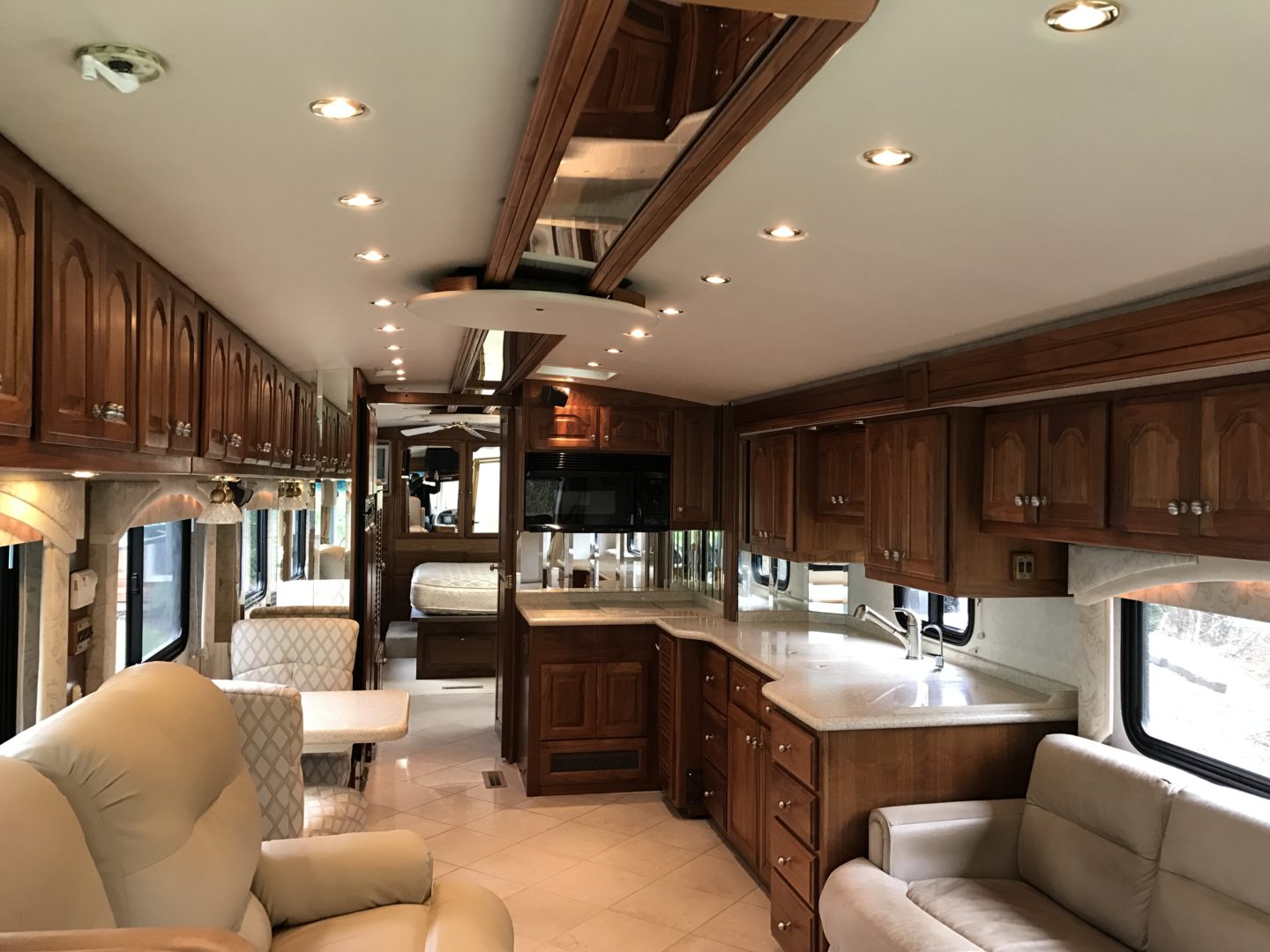 On the papers we signed while buying our RV, the contract said,”Olinger Travel Homes D.B.A. Camping World”. Neither of us are fans of supporting large corporations or businesses, and given the chance we’d happily buy our RV from a private seller or small, local dealership. In the end however, we went to where we could find the best deal. Most every RV we’d seen at Camping World was substantially overpriced, probably to provide a buffer so that savvy consumers can bargain them down and “feel” like they’re getting a good deal.

We were speechless when we saw our RV on their website. It was listed below the NADA value, which we’d never before seen with ANY of Camping World’s listings. We became excited but remained cautious throughout the deal waiting to see why it was so reasonably priced. Watch our RV Purchase videos for all that info, but the short version is that everything worked out well.

It just really surprised us that some company we’d never heard of was the “real” entity which we were buying the RV from. If you went to McDonald’s for a burger and the red headed girl from Wendy’s was serving you a Whopper, wouldn’t that concern you? So many bad scenarios could go down. What’s to say that every year a new and super-shady company takes ownership of the Camping World we bought from. They could be the worst people imaginable and build a bad reputation until they sell out to another company the next year. With a clean slate, the new company could start the whole process over again. That kind of anonymity could be really dangerous for consumers like us spending tens of thousands of dollars. How can we know who we’re dealing with if the name Camping World is just a name to hide behind?

After this experience, I’ve learned that for any future RV purchases we’ll need to dig a little deeper. Most of this information is probably in the public domain, and it would be critical information to know who we’re dealing with. There are so many outlets for people to post reviews of their experiences (Yelp, Angie’s List, etc.) and that information can be incredibly helpful to the next person. 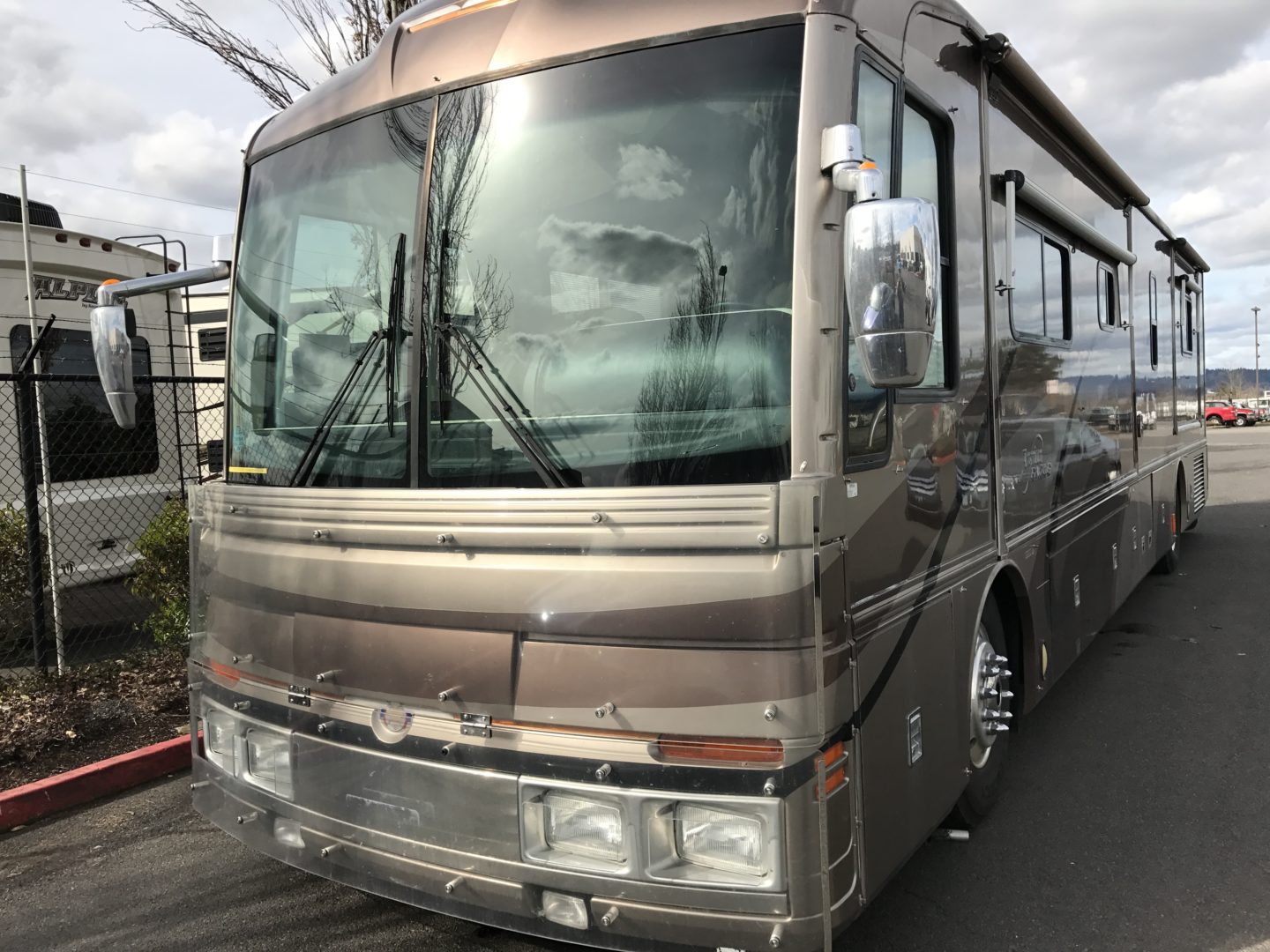 3 – Who REALLY owns those RV’s

The dealership does, right? Think again. In this case it was a bank. Not even Olinger Travel Homes doing business as Camping World owned these darn’ things! Talk about a confusing company structure, let’s break this down…

Who did we buy it from…?

We spent considerable time looking at RV’s and at some point this topic came up briefly. We learned the bank’s name was American XYZ-something, and that it’s the true owner of the RV’s filling the dealership we bought from. It appears this bank purchases lots of RV’s at very low prices, then Camping World, or rather Olinger Travel Homes, leases the RV’s from the bank for a monthly fee. The faster the RV’s sell, the less money Olinger Travel Homes has invested = more profit.

That makes sense as to why RV dealers are in such a rush to offload their RV’s. What further adds to this rush is the fact that RV’s depreciate, really really quickly. In a year a $300K RV could easily drop to $270K, then tack on those lease payments and you can start to see the slippery slope of its diminishing value.

What it all means

I’ll be the first to say this information isn’t earth shattering, at least not initially. However, once you begin to understand how things work within the RV business I think you can begin to paint a clearer picture of what exactly is taking place behind the iron curtain. Negotiations can be very dynamic, and if you understand what the dealer is up to you’re in a better place to beat them at the games they play. As in our case, if we’d known they kept the $1,500 fee blanketed beneath false numbers we could have exposed that and squeezed harder landing us an even sweeter deal.

You could easily spend days or weeks haggling over every penny, so at the end of the day it’s important to go into negotiations with parameters already sorted out. Similar to playing the stock market, you must set your parameters of acceptable prices. In stocks, if you don’t know when to pull the trigger it’s easy to lose a boatload in a few months when you only feel the loss of a few cents per day. For Jenny and I it was easy, the max we decided to spend on an RV was $60K. That might sound excessively high to some people, but keep in mind that this will be our home for a year or more. How many people do you know with a home that costs less than 60 grand?

Since our RV was valued at over $70K and priced at $60K, we literally could’ve bought it at the asking price. We’re too cheap-assed for that however, and I’m proud to say we whittled that initial $60K price down an additional seven thousand dollars; that’s huge! Seven grand! That’s seven-hundred-thousand pennies! When we sell our home that’s seven more thousand dollars that we will keep in the bank and seven more thousand dollars to travel the world. Every penny counts, and we encourage you to become a penny pincher too. Stick it to em’

Whenever I get my sorry ass in gear, I’ll finish the blog post for our 4 RV Purchasing videos. I’ll also put a link here to get you over there. Knowledge is power and with all the stuff we’ve learned I’m confident that we can help you save a substantial amount of money on YOUR RV purchase. Thanks for checking us out and I hope this helps any future RV buyers. 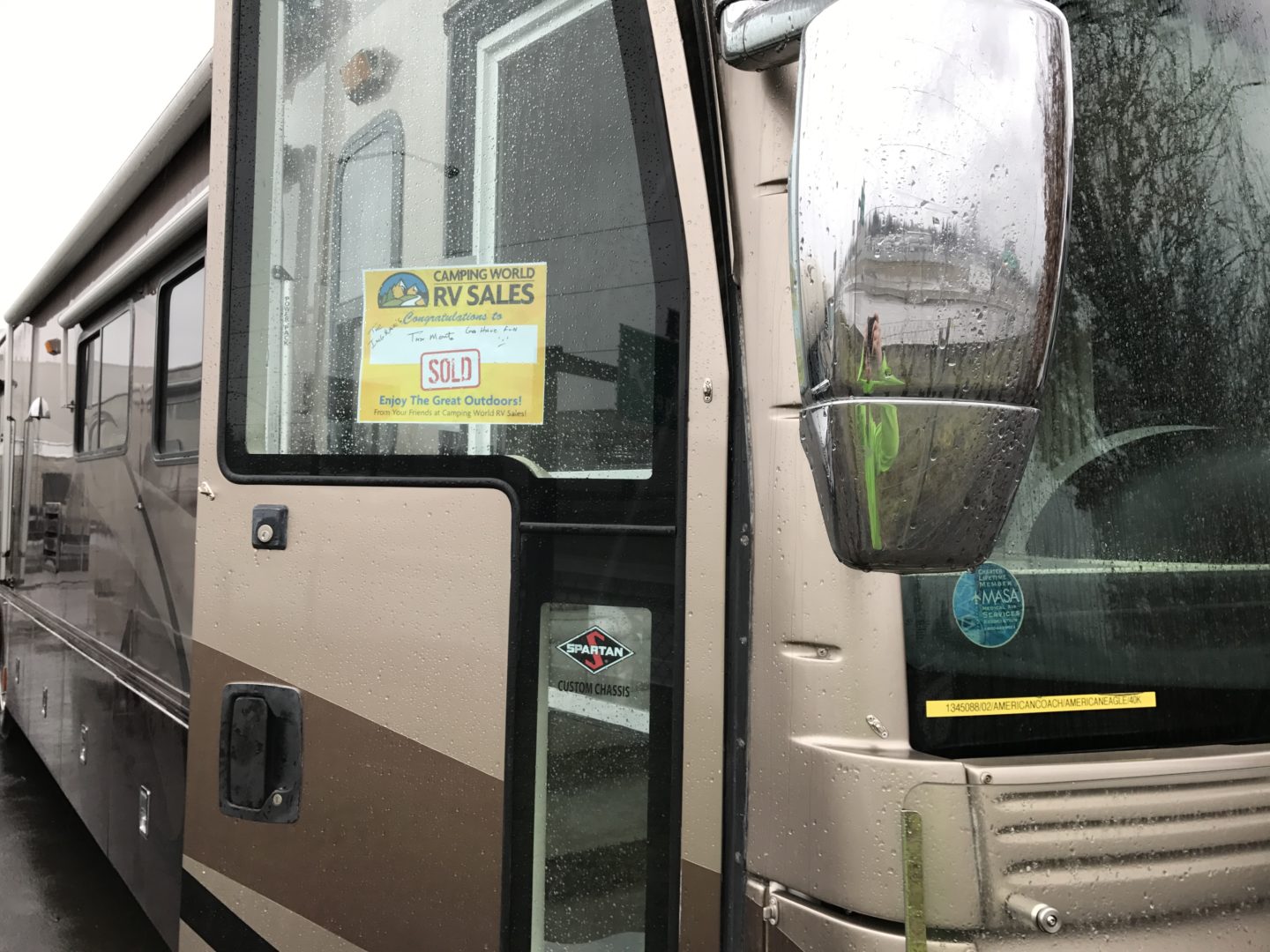