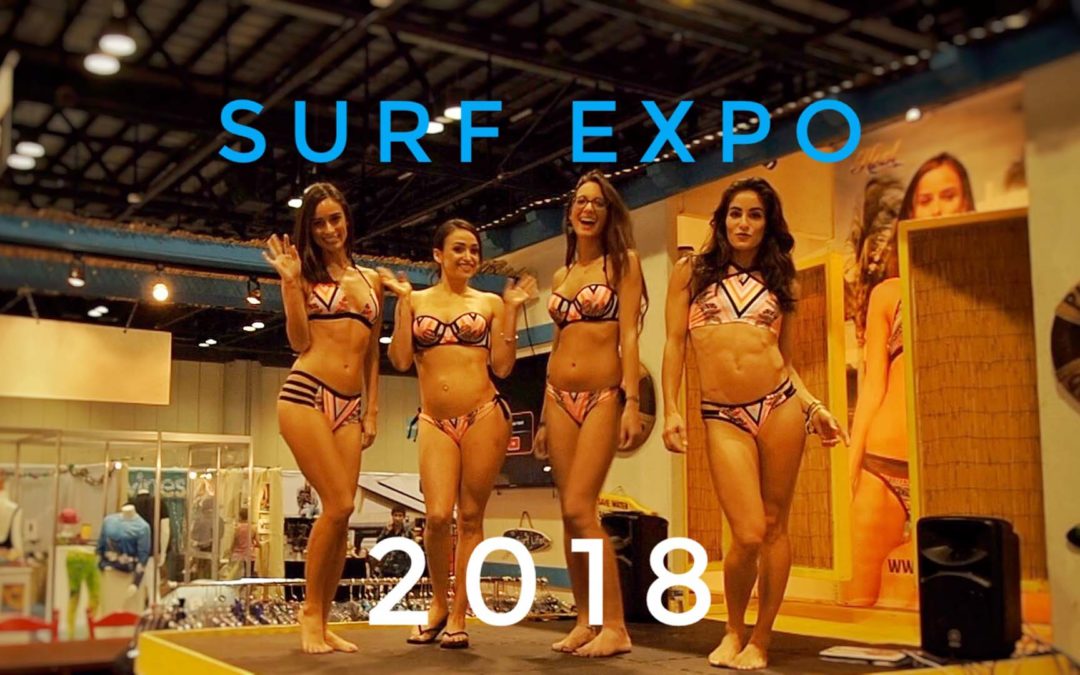 With media passes for the Florida Surf Expo, we seized the opportunity to check out 2018’s newest surf gear. The Surf Expo isn’t open to the public and much of the gear showcased hasn’t even hit the streets yet. This was a chance to make sure we have fun stuff for “Season One” in our trip to Baja Mexico, brah’.

Arriving at the Surf Expo, we discovered just how big it was while parking in a sea of cars nearly a mile deep. We’ve done a few RV shows but this took things to a whole new level, the Orlando Convention Center is MASSIVE. After checking in and getting badges, we thought we’d waltz right in and quickly chat with vendors about all the cool gear. There was too much to see in just one day however, so we ended up going all three days and still feel like we only scratched the surface.

We checked in and with badges adorned, we headed down to the show floor but couldn’t help noticing “the Georges” on the way there. These guys were great! Both sported some pretty sweet hairstyles and George Jr’s wild hair was fantastic. With my own hairline retreating as fast as a glacier in Jamaica, perhaps I’ll give it a try soon. 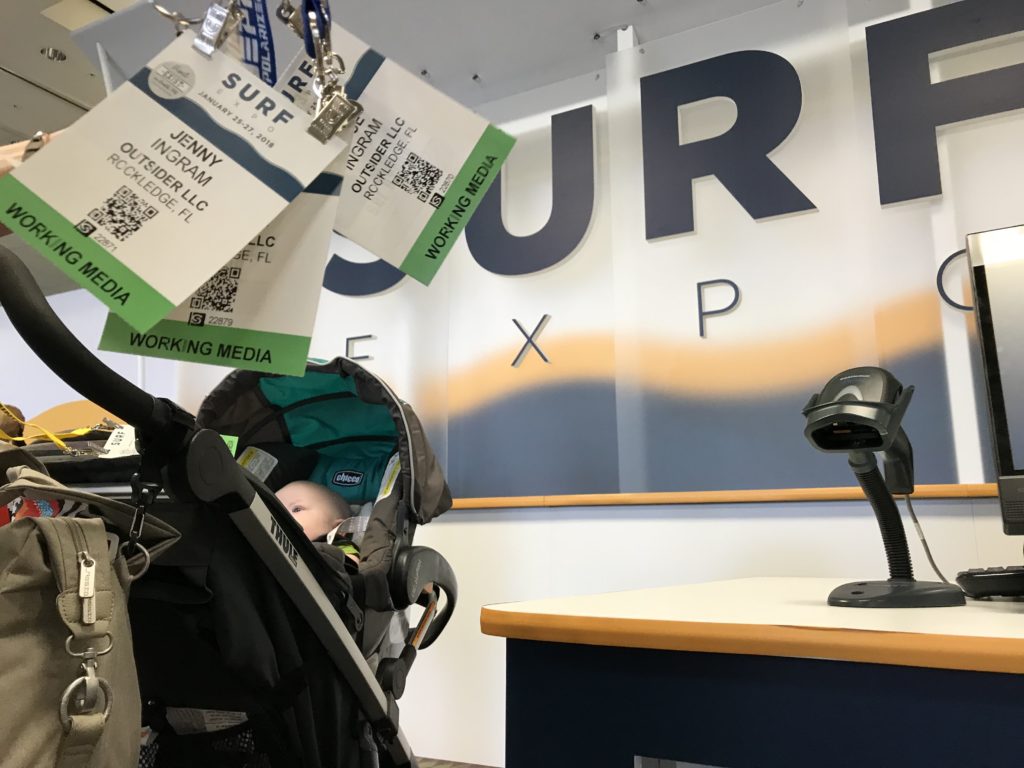 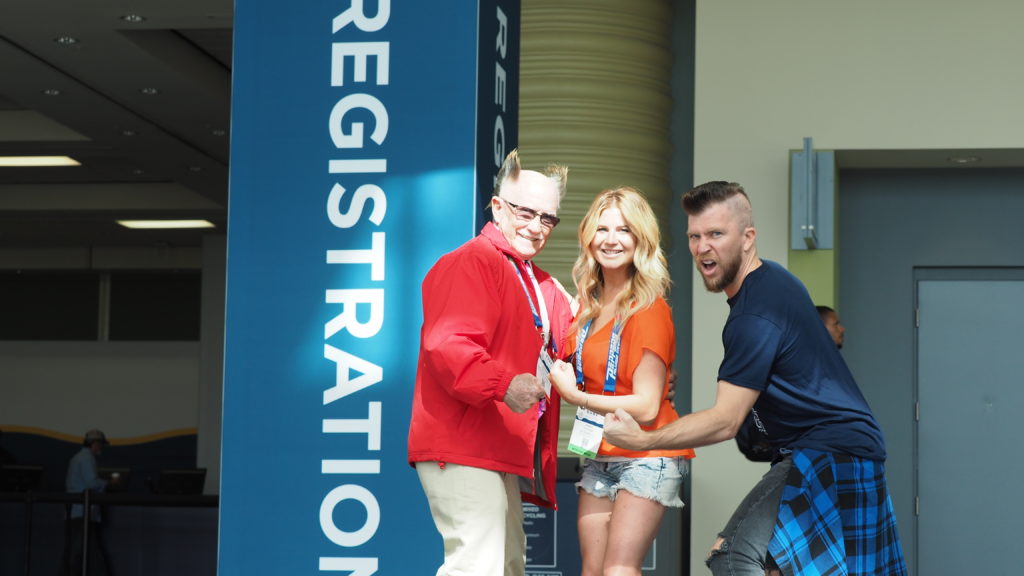 While the surf industry seems big, and sure it is, this was one of those times when it seemed a little smaller. If you haven’t seen last week’s video and blog “Ten Feet of Freedom” be sure to check it out. In that blog we showcased my new longboard crafted at Ricky Carroll’s surfboard factory in Rockledge, Florida. It turns out that Ricky Carroll, world renown surfer and surfboard shaper, was mentored in his early years by George Jr, crazy! George Jr’s son, George the 3rd, is an avid surfer as well. He has a YouTube channel with additional content on crossfit. Be sure to check out GoofyFootGeorge on YouTube or @GoofyFootGeorge on Instagram 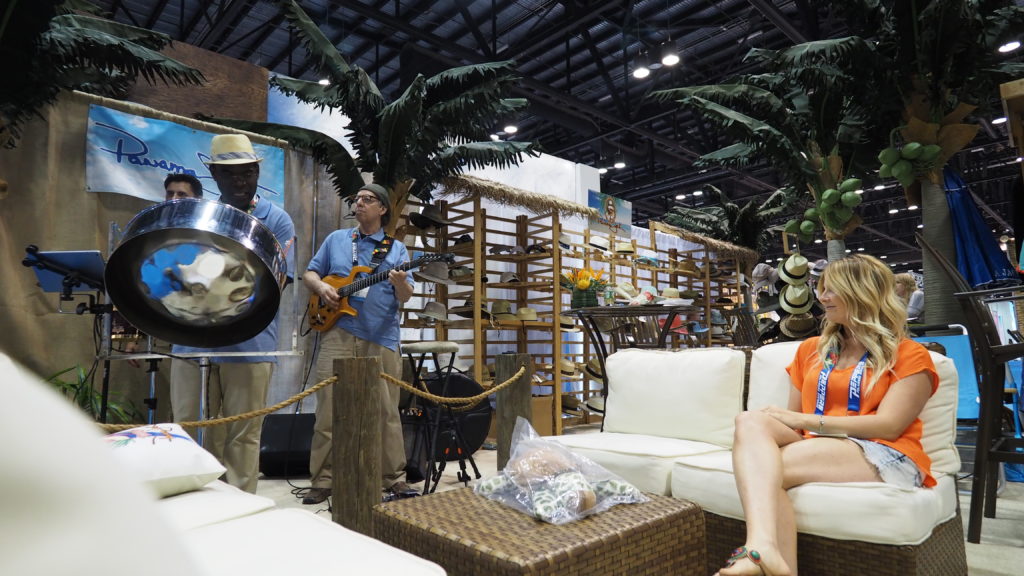 We consider the three days spent a total success. I found a super stretchy wetsuit for the cold Pacific waters in Northern Baja, Jenny found a pair of sunglasses that don’t rip her hair out, and Tucker had all the babes with Heat Swimwear blowing kisses his way.

The super stretchy wetsuit I bought was from a company named Buell. Last winter we escaped the soggy Pacific NorthWest and surfed all over Southern California. One day, despite the crowded surf, I scored several nice waves at the infamous “Pleasure Point”. We found it fitting to then refuel at “Pleasure Pizza”, neighbors of Buell. I wish I’d have known then such awesome wetsuits were just across the street!

Next we found Salt Life at the show. We had to check them out since their brand is about surfing, fishing, and diving, the exact activities we have planned in Baja, Mexico. Jenny gave up on metal-framed sunglasses years ago because they would always snag and rip her hair. Tony Tarlton, the nicest guy we met at the show, offered to show Jenny some Salt Life sunglasses while I talked with the guys that designed and created them. 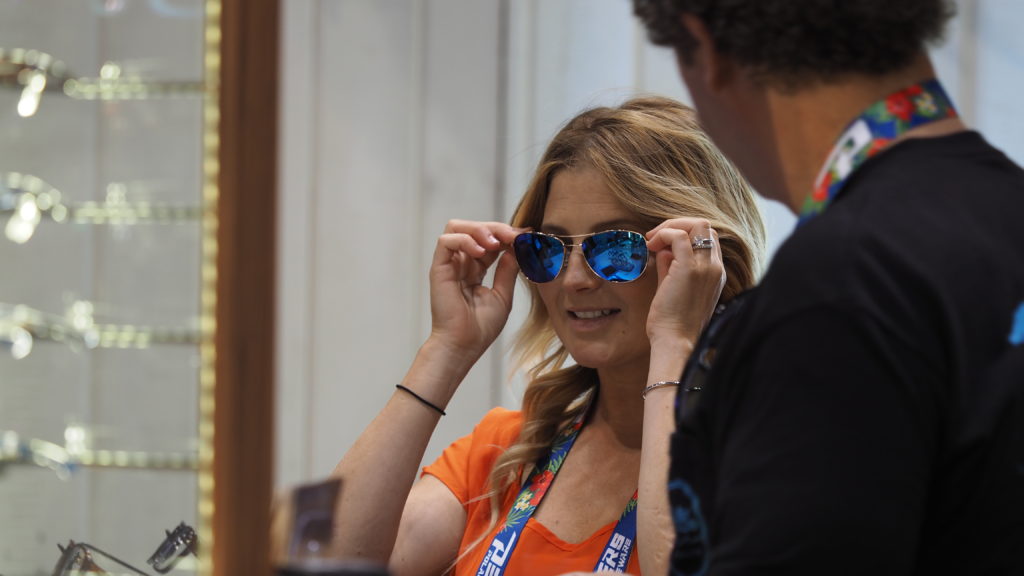 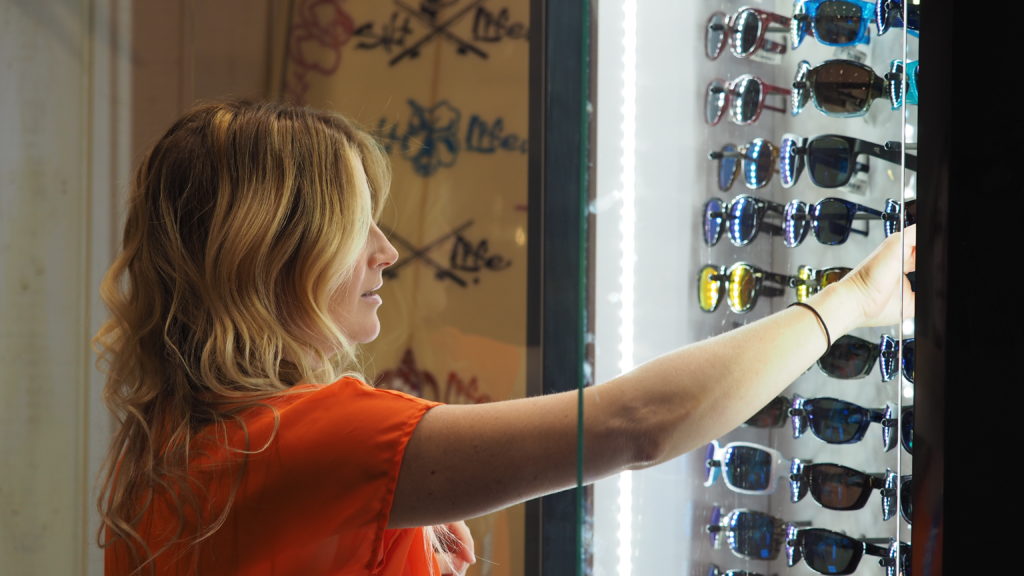 As Jenny spoke with Tony, I discovered what goes into making a pair of sunglasses and learned there’s more to a pair of sunglasses than you’d think. First, where are they made? Many companies use cheaper labor markets such as China, but that leads to cheaper glasses. Some companies craft them in the US or Italy, but higher wages mean either more costly glasses or cheaper parts in order to keep prices competitive. Not only has Salt Life obtained the “Zeiss” stamp for their lenses, which means the lens is perfect and has no distortion, they also have their frames made in Italy which they explained is one of the most expensive options. The engineers, (yeah the actual guys who designed and crafted these glasses were at the show!) explained that their sunglasses, most under $200, would match or beat any of the premium brands from Italy. Think Prada, Versace, Dolce & Gabbana etc. Sorry for such a long tangent on sunglasses, but I was thoroughly impressed with everything I learned. And how cool is it to speak with the people who created what we’re wearing!

Tucker quickly met the crew at Sun Bum’s exhibit as he chillaxed’ on their sofa looking like a baby model, and he quickly had pretty women holding him while he grinned ear to ear. Sun Bum’s mascot was on display, right in the center path of the show, and was nearly three stories tall. For lil’ Tucker it probably seemed like 30 stories! Their couch was a great place to regroup and plan our route for traversing the show. On the final day, they marked all their products half price which means I’ll be lathering lots of Sun Bum lotion on my hot wife in Baja, score! 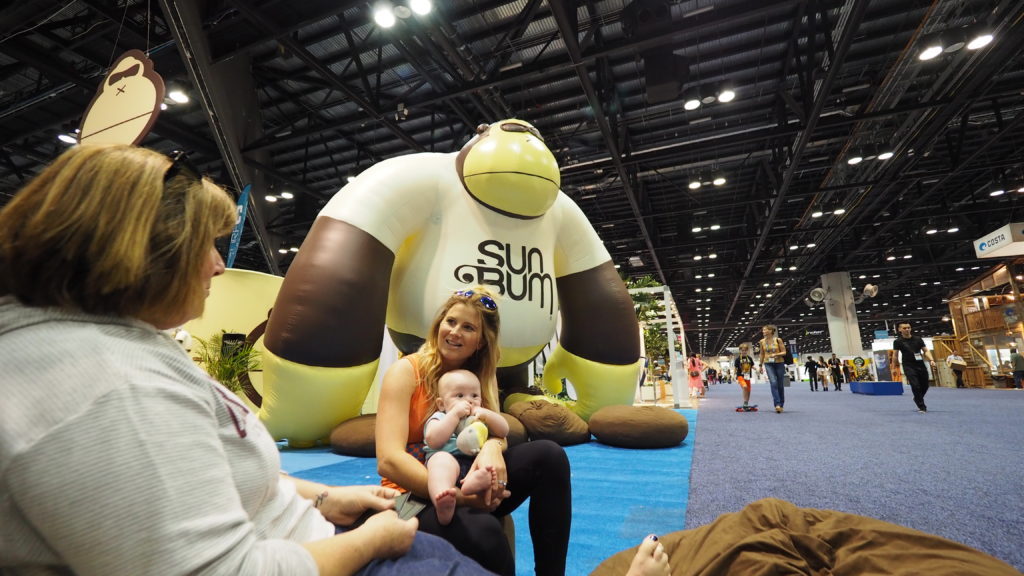 On day two we found ourselves walking aimlessly in circles (a common theme during our 3 days there) and looked up to see Sink the Stink. In case you’ve never heard of it, you can find this product at nearly any dive shop. We found ourselves standing face to face with Bob Denton, creator of Sink the Stink. We explained it was funny meeting him, as we’d just received a few bottles of his product for Christmas presents. Since we’ll spend countless hours in the Baja waters, with one watersport activity or another, Sink the Stink was a necessity for our arsenal. One cool tidbit we learned, was that this product isn’t a chemical but rather a biological reaction. Other companies offer chemicals which can degrade the fabric of your gear, but instead of chemicals Sink the Stink is full of “good bugs” which don’t stink after dying. They out compete the “stinky bugs” which would have otherwise died and off gassed nastiness all up in your suitcase. We took Bob out for drinks and eventually he cracked and gave us the secret recipe for his product: cow urine and gym socks. This stuff isn’t cheap so we’ll let you know how our first “homebrew” turns out. Or maybe not…

Sharing a booth with Bob Denton was Matt Andon. He’s created waterproof iPhone cases, and his newest one the Pro Shot Touch allows you to touch the screen, underwater! I can think of dozens of ways to use that to get cool footage for our Baja videos. Unfortunately he sold out, but hopefully we’ll get our hands on one soon. You can find them at www.ProShotCase.com

Before leaving the show, we met an OOFOS ninja. We’d never heard of OOFOS, but this guy kept popping up, everywhere. Just as we finished a bathroom break and had a few spare moments, the ninja, Jon Salas, popped out of nowhere and said he had some sandals we needed to try on. We had nothing better to do than continue walking in circles so we figured why not?

We quickly learned why their sandals are called “recovery footwear”. I seriously felt like I was walking around with pillows strapped to my feet. Their thick soles felt strange at first, and then I learned to embrace it. On the mile long walk back through the sea of cars, I stiff-legged every step down the stairs to the parking lot. Each impact should’ve dislocated my patella, but instead of cracking cartilage all I accomplished was looking like a dumbass walking down stairs. Thanks Jon, aka Sandal Ninja.

There are loads more companies to tell you about, but we’ll save them for next year’s Surf Expo. If you enjoyed seeing what all goes down at the Surf Expo, please subscribe to OutsideIsCalling.com and let me know what you’d like to see next year! I also hope you’ll follow along with us in Baja, Mexico for “Season One” of our epic, year long surf trip. Be sure to subscribe on YouTube to follow all that good stuff too! 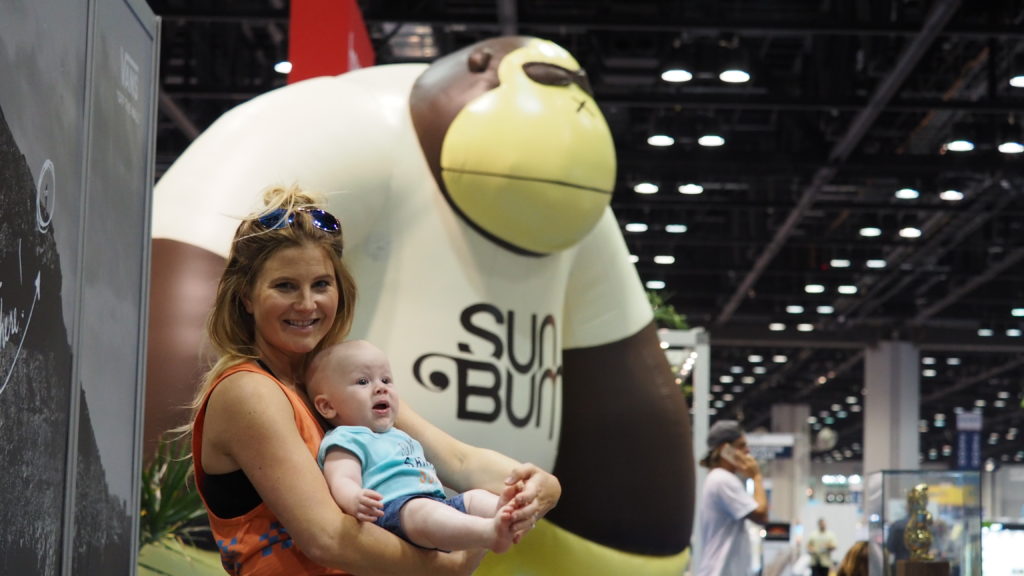 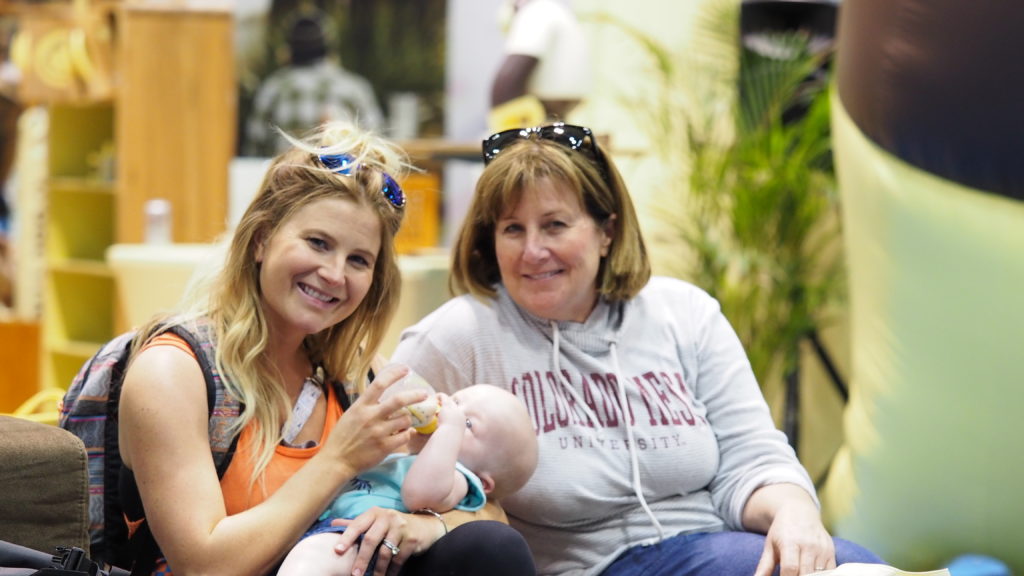 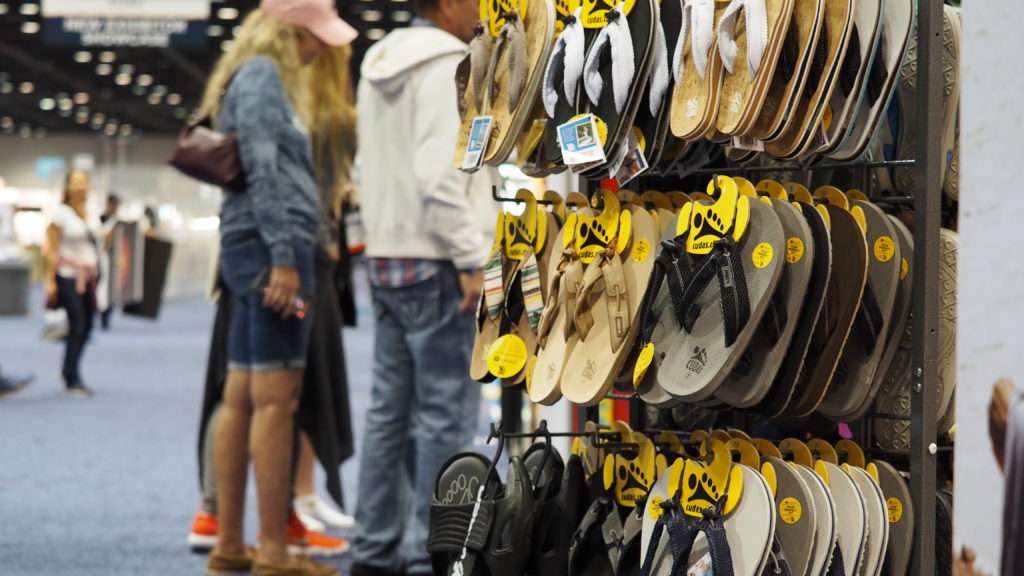 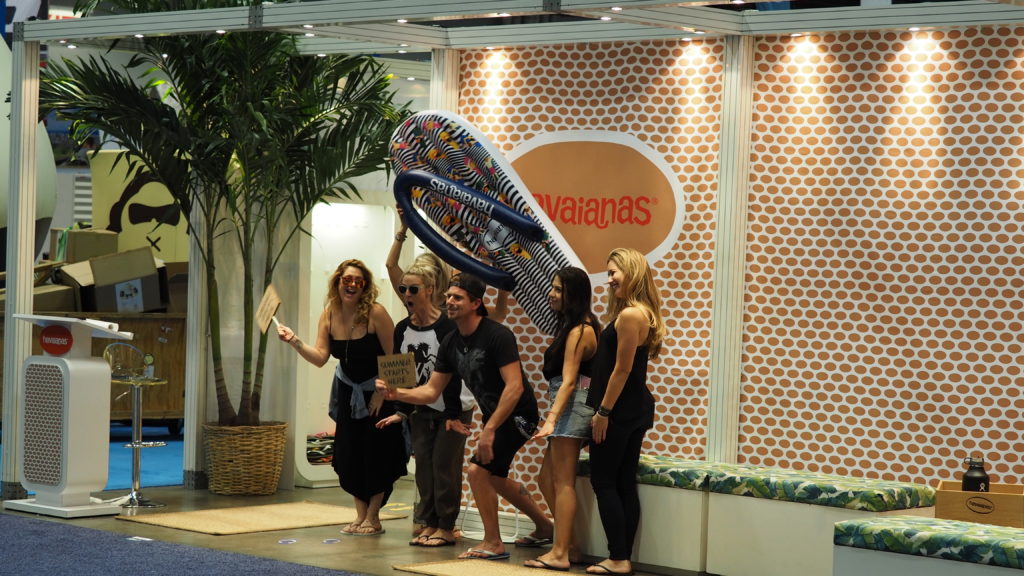 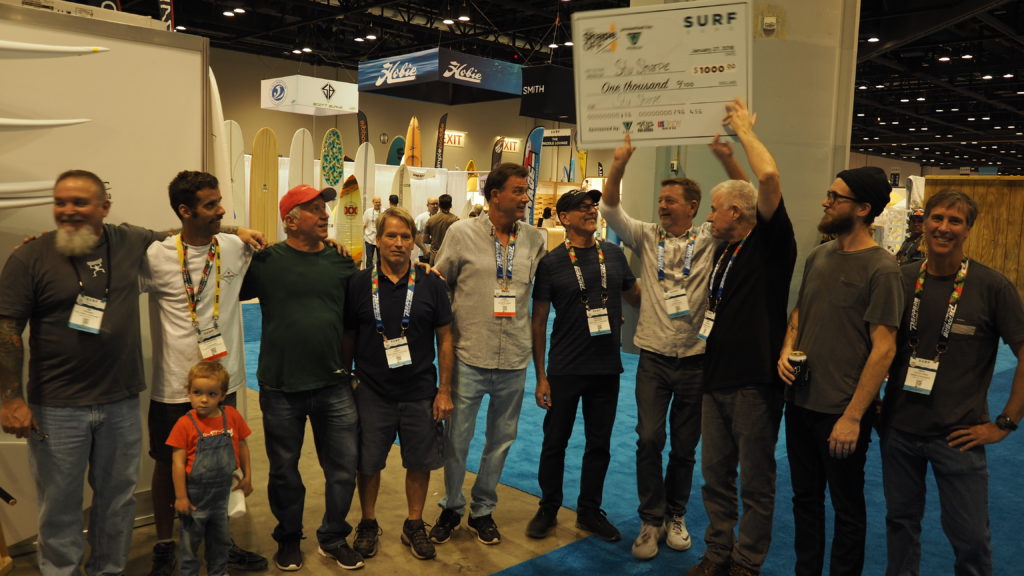 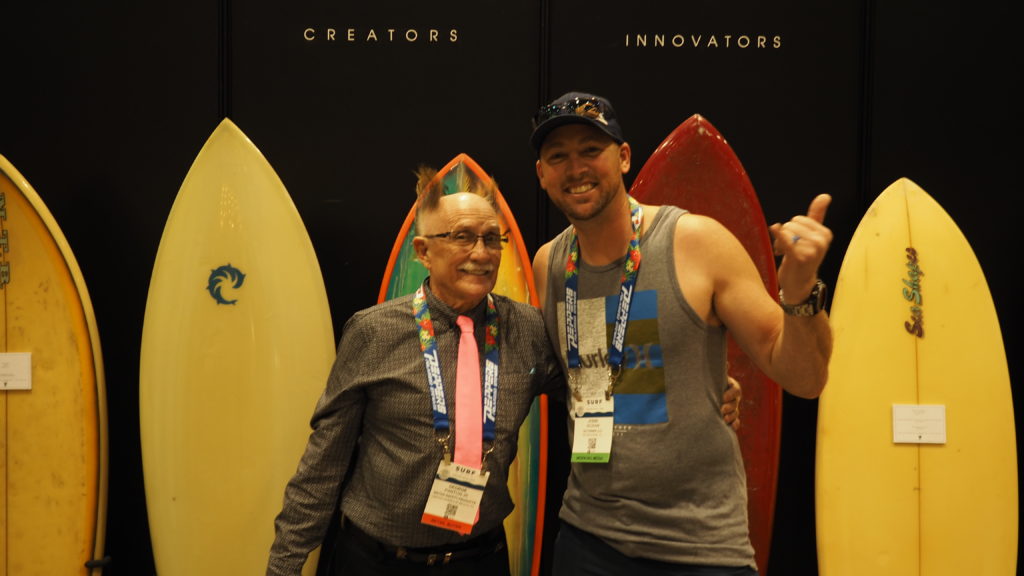 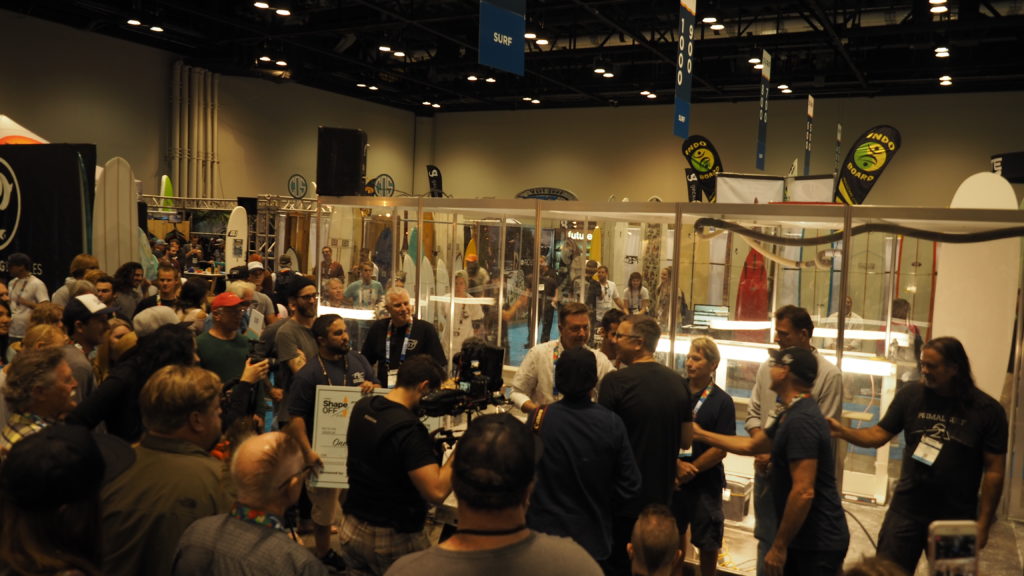