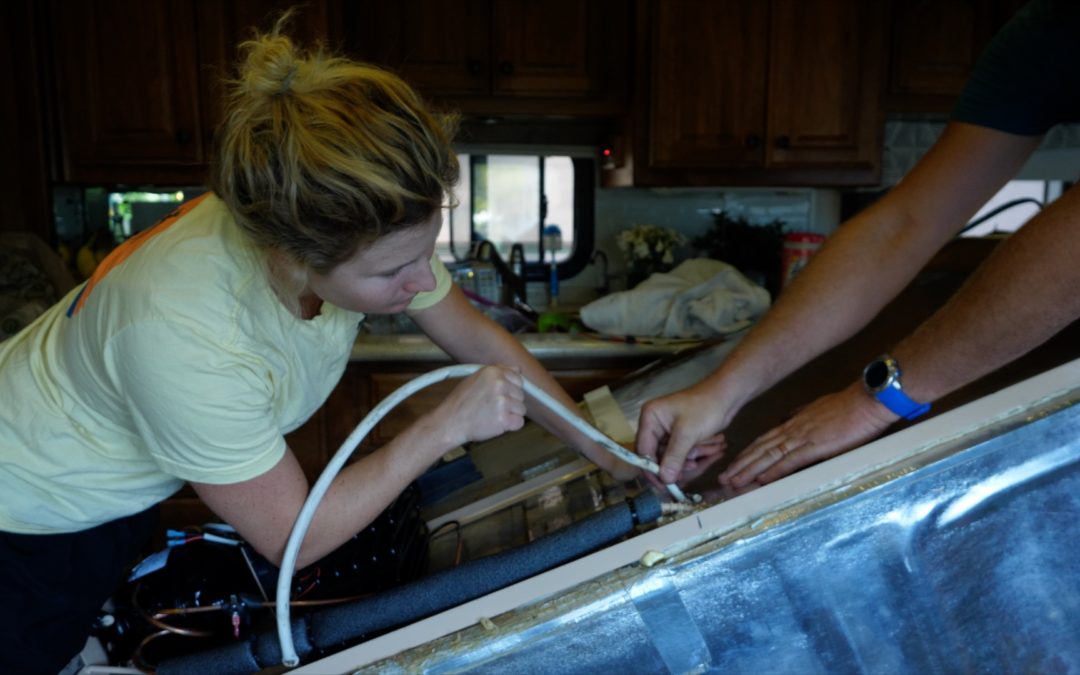 Video Above – Part One

First and foremost, this was a very successful RV Fridge upgrade/overhaul. We saved a ton of money and did the work ourselves. If you are considering this job, here is our list of ALL the tools and gear we used to do it!

Do we REALLY need to replace the RV fridge???

“RV Camping” is a funny term because our RV has everything and the kitchen sink. When I hear camping I think of tents, burnt food, and peeing on a tree. Nonetheless we do our fair share of RV camping a.k.a. boon-docking, and we love having the comforts of home in the middle of nowhere.

On one such camping trip I baked some chocolate chip cookies in our convection oven for nine minutes, which I’ve found produces an absolutely perfect cookie. Then I poured a glass of milk, sat down and took the first bite of my warm, freshly baked cookie. Everything was perfect, until I took a sip of sour milk.

If the milk was going bad, I could only guess what else was spoiling in our mildly cool refrigerator. What unseen creatures lurked about? I knew RV refrigerators were expensive, and replacing our fridge would require taking out the windshield. I avoided this day as long as possible, but the spoiled milk meant that our medicine was at risk since it too has to stay cold. It was time to do something.

Shopping for a NEW Fridge

Probably the single biggest way we afford to travel “full time” is our inherent cheapness. I (Jesse) am quite happy wearing my old camouflage pants from the military and a pair of flip flops. The pants are now faded old shorts but they’re comfortable, and luckily my wife Jenny is pretty minimal too. We’re beach bums at heart, and while we have a handful of nice clothes there is rarely a need for them.

I can safely tell you that if I’m too cheap to buy new shorts, I’m definitely too cheap to buy a three thousand dollar refrigerator. So what were we to do? On Facebook Marketplace within a few hours drive I located two Norcold 1200 RV refrigerators that looked like good deals.

One was six years old, priced at $900, and had been swapped out for a residential refrigerator. The other was supposedly brand new, and was a $1600 scratch and dent deal that “I’d better hurry and get since it was the last one in stock and there was no telling when another would be available.”

I was stumped, what was the best deal? $900 sounded pretty good but that fridge was used and six years old. The new unit was from a shady company that operated in the dark via Facebook and how could I know if their fridge would last? I already had one worn out refrigerator, and I didn’t want to spend over three thousand dollars for a good replacement.

I watched YouTube videos to see if maybe there was something I could fix, or anything that would allow me to defer this monumental task. Eventually I stumbled onto a couple videos showing an option I hadn’t considered. These guys were replacing the cooling system that mounts on the back of the RV fridge, and it didn’t look too difficult. It didn’t look easy either, but to keep two thousand dollars in my bank it was a solid option.

Searching for “RV Cooling Units” I was finding all sorts of new options. Some were factory Norcold OEM units, but most were made from from other companies across the US like RVCool. Wick, one of the YouTube guys I’d watched made them in Arkansas. I called to see what the cost would be and although he didn’t have any for my model in stock, he spent twenty minutes educating me on cooling units and how they worked.

It turns out, the Norcold 1200 we have has a major recall which if not corrected could set our RV on fire. I wasn’t too worried as our fridge hadn’t caught on fire within the last 19 years of its life, but that’s good to know. It also makes me happy I hadn’t purchased either of the fridges from Facebook Marketplace which could’ve had recalls as well.

A Sea of Cooling Units

Wick went on to explain that the Norcold 1200 piping wasn’t thick enough, allowing the pipes to fail and crack. Most cooling units are now built with thicker walled pipe, and as I searched for other cooling unit manufacturers, this thicker-walled construction became a standard part of their sales pitch.

Cooling units are much smaller than the entire refrigerator, but they’re still very large and get shipped on a pallet, often via semi-truck. That meant I wanted to find dealers as close to my location in Florida to keep the freight charges low. Tom & Cait Morton, RV friends of ours replaced their cooling unit about a year ago so I inquired where they got theirs.

Dutch Aire, made by JC Refrigeration in Shipshewana Indiana, was the perfect match. I gave them a call and sure enough they had some cooling units for our model in stock. But before making the purchase I learned about ANOTHER new option I hadn’t heard of yet. A 12volt DC powered compressor style cooling unit.

An Even Better Option

What was I to do? Go with the original absorption style cooling unit that takes forever to cool down, or try the new style that was cheaper, super efficient, and that operated just like a residential fridge. You bet your ass I went with option #2 I’m in!

Their (HVAC) style compressor cooling unit is cheaper to manufacture and it would work very well with the solar power and Battle Born lithium battery system we have onboard. Even cooler was the fact that Dutch Aire had improved this unit making it quieter than prior versions.

I inquired if the company might need or want any videos created showing our install of this new unit, and they did! This was a brand new unit Dutch Aire created and many RVers were having questions about installation. They said that if I could create an install video it would really help people out and they would lower my cost in return for the video, what was I to do!?

If you haven’t heard, I have some videos sharing the entire process of replacing our Norcold 1200 cooling unit. Who am I to turn down a good deal, although I spent a ton of time making these videos so I’m not sure how much I really saved. Hopefully they’ll help a bunch of people and be worth all the effort, and either way it was the best thing that could’ve happened to our fridge.

If you haven’t already, I encourage you to check out the videos. My wife Jenny and I cover all the pros and cons of the new unit as well as other considerations to keep in mind. They’ll also give you a good idea of how much work is involved.

We’ve done larger projects, but this was no easy task. I try to avoid big jobs such as these but the amount of money we saved was completely worth the effort. Two thousand dollars can go a long ways!

Our fridge works as good or probably better than any other Norcold 1200. Thanks to our DC powered compressor, the fridge can pump as much cold into the fridge as needed. (Yes it’s actually moving the heat out for you technical people out there) It’s now summertime in Florida and there is no shortage of cooling in our fridge, in fact, we’ve lowered our temperature setpoint from 8 down to 6 and the fridge is still reaching 34 degrees easily. (Our unit has settings from 1-warmest to 9-coldest)

We have nothing but great things to say about Dutch Aire and their support during the install of our cooling unit. They’re an Amish company in Indiana and you can tell they put lots of work and effort into their products.

Please leave a comment in one of our videos sharing your experience and anything that might help out the next Rver.